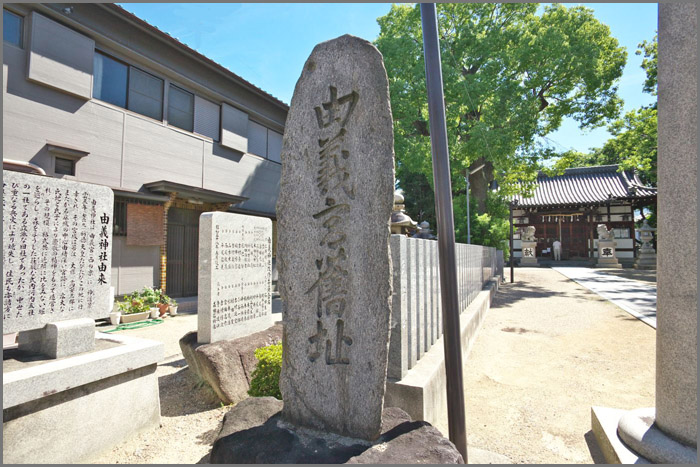 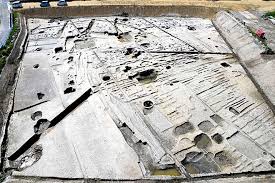 The Higashi-Yuge archaeological site in Yao, Osaka Prefecture, where the remains of pillars and trench digs dating to the eighth century have been discovered (Provided by the Yao municipal board of education)

YAO, Osaka Prefecture--Evidence of structures dating back more than 1,000 years at an archaeological site here points to the existence of a "second" capital that is known only through eighth-century chronicles.

Archaeologists say pits dug in the ground for massive wooden pillars, along with evidence of an extensive trench, offer compelling indications that the Higashi-Yuge ruins hosted Yuge-no-miya, a site shrouded in mystery.

This other capital was purportedly built at the behest of female Emperor Shotoku, who ruled from 764 to 770 during the Nara Period (710-784).

Emperor Shotoku (718-770) is known to history for favoring a Buddhist monk named Dokyo, who died in 772 having attained great power under her patronage.

Dokyo won court favor through his devoted prayers for her health after she fell seriously ill. The emperor later promoted him to the extremely influential post of “hoo,” the highest rank among Buddhist monks.

The discovery of the sprawling complex at the Higashi-Yuge site was announced Aug. 16 by the Yao cultural property research council, which is affiliated with the Yao city government.

Masashi Kinoshita, professor emeritus of archaeology at Tokyo Gakugei University, is expecting that further excavation of the site will shed light on the second capital city.

“Few details are known of Yuge-no-miya. The recent discovery of the canal may help unravel the mystery,” he said, referring to the excavation of trenches, which experts believe were filled with water and used to transport building materials.

In February, archaeologists said they unearthed the first evidence of a huge pagoda for Yugedera temple at the Higashi-Yuge site. The temple was built by Dokyo there before his fall from grace following the death of the emperor.

Both Yuge-no-miya and Yugedera are mentioned in “Shoku Nihongi,” the imperially commissioned history text on the Nara Period, but there was no evidence to support this until recently.

A large section of the second capital got built, but the city was never finished due to Emperor Shotoku's death.

The latest excavations are being carried out 500 meters or so northeast of where the apparent pagoda foundations were unearthed.
The square-shaped pits measure between 60 centimeters and 80 cm. Experts believe that pillars 20-25 cm in diameter were sunk into the holes. The pits are lined up in the four points of the compass. That suggests Yuge-no-miya was constructed there, according to Masanobu Hirose, a member of the council.

“The site shows that there was very precise demarcation,” he said. “Yuge-no-miya, set out neatly in a grid pattern, must have sprawled to the area where archaeologists are now working.”

The trench is about 10 meters long, 16-20 meters wide and 1 meter deep.
Coupled with a 60-meter-long trench found nearby last summer, it is thought that they formed part of an artificial canal measuring some 600 or 700 meters in total length.

Archaeologists speculate that the canal was built to transport materials to build the second capital and Yugedera, or to serve as drain bypass for river works.

Kinoshita said he leans to the former theory.
“Workers need to transport building materials, such as large pillars and tiles, by water in short bursts, to efficiently construct key structures of a city based on meticulous planning,” he said. “I believe that the trenches were most likely a portion of the canal built to transport building materials for Yugedera and Yuge-no-miya."

In the finding announced in February, archaeologists said the possible foundations of the Yugedera's pagoda were found in a geological layer dating to the late Nara Period.

The foundations measure approximately 20 meters by 20 meters, which suggests the structure was at least seven stories high and rose to a height of more than 60 meters.
- source : asahi.com/ajw/articles... 2017 - 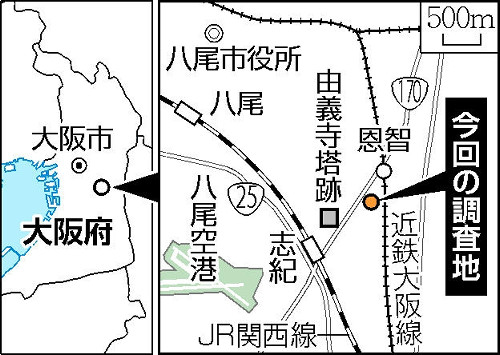 Email ThisBlogThis!Share to TwitterShare to FacebookShare to Pinterest
Labels: - - - History