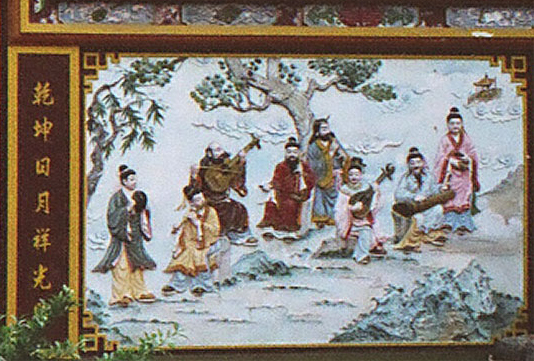 He Xian Gu (何仙姑; pinyin: Hé Xiān Gū) - 何仙姑（かせんこ）Kasenko
The Immortal Woman
He Xian Gu’s immortality is due to a consistent diet of powdered mother-of-pearl and moonbeams. While swallowing it, she vowed to remain a virgin.
According to a different version, He Xian Gu, daughter of a 7th-century shopkeeper, ate a magic peach and became immortal. Since than she is flying about.
She is attributed by the lotus/lotus pond, which can cultivate people through meditation.
Occasionally she is attributed with a peach, the divine fruit of Gods, associated with immortality or a music instrument or a ladle to dispense wisdom, meditation and purity.

Cao Gou Jiu (曹國舅; pinyin: Cáo Guó Jiù) - 曹国舅（そうこっきゅう）Sokokkiyu
The Royal Uncle Cao
Cao Gou Jiu is reputed to have been the brother of a 10th century Song Empress, the uncle to the Emperor of the Song Dynasty and the son of a military commander. His attribute, the castanets, are thought to be derived from the pass that gave him free access to the palace, a benefit of his rank.
He is also attributed with a jade tablet, which can purify the air.
According to another version, Cao Guo Jiu's younger brother Cao Jingzhi was a bully, but no one dared to prosecute him because of his powerful connections, not even after he killed a person. Royal Uncle Cao was so overwhelmed by sadness and shame on his brother that he resigned his office and left home.
He is represented by wearing formal court dress, always the finest dress among all Eight Immortals, and carrying castanets.
Cao Gou Jiu is the patron deity of actors.

Li Tie Guai (李鐵拐; pinyin: Lĭ Tiĕ Guăi) Li Tieguai. - 李鉄拐 / 鉄拐李（りてっかい）Ri Tekkai
Gama Sennin 蝦蟇仙人 "Toad Immortal"
The Iron-Crutch Li
Because of his great skill at magic, Li Tie Guai, was able to free his soul from his body and aid and meet others in the celestial realm. Li Tie Guai, a good looking man used his skill frequently. Once, while his spirit was gone from his body, a disciple decided that Li Tie Guai was dead and burned his body as was traditional. When Li Tie Guai’s soul returned from its travels, he was forced to enter the body of a beggar.
He is represented as a lame beggar carrying a double gourd. The gourd, symbolising longevity and the ability to ward off evil, has a cloud emanating from it. The cloud represents the soul, depicted as a formless shape.
The gourd represents also helping the needy and relieve the distressed.
Sometimes Li Tie Guai is pictured riding the qilin.
Li Tie Guai is the emblem of the sick.
. Gama Sennin 蝦蟇仙人 "Toad Immortal" - 劉海 Liu Hai .


Lan Cai (蓝采和; pinyin: Lán Cǎihé) - 藍采和（らんさいか）Ransaika
The Immortal Hermaphrodite
Lan Cai is said to have wandered the streets as a beggar while singing a song about the brevity of mortal life. Her/his attribute is a basket of flowers associated with longevity, which she/he carries to remind viewers of the transience of life and with which she/he can communicate with gods.
She/he is variously portrayed as a youth, an aged man, or a girl; in modern pictures generally as a young boy.
She/he is represented by wearing a tattered blue gown and only one shoe.
Lan Cai is the patron deity of florists. 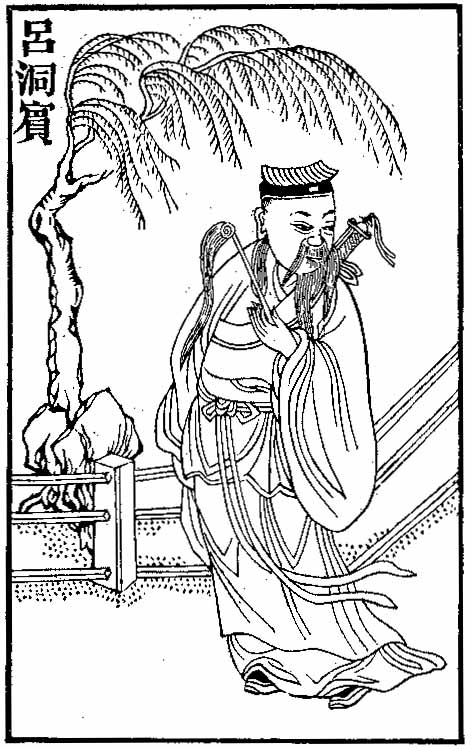 Lü Dongbin was an 8th-century scholar, who learned the secrets of Taoism from Zhuang Lin Quan. Dressed as a scholar, he is honoured as such. His attribute, the sword, which can subdue the evil, allowed him to travel the earth slaying dragons and fighting evil.
He is represented with a sword on his back and a fly brush in his hand.
Lü Dongbin is also the patron deity of barbers.

Han Xiang Zi (韓湘子; pinyin: Hán Xiāng Zi) - 韓湘子（かんしょうし）Kanshoshi
The Philosopher Han Xiang
Han Xiang Zi is said to have been the nephew of Han Yü, a famous scholar of the 9th century. Among his special skills was the ability to make flowers bloom instantaneously and smooth wild animals. His attribute is the flute, which can cause growth.
He is represented as a Happy Man.
Han Xiang Zi is the patron saint of musicians.

Zhang Guo Lao (張果老; pinyin: Zhāng Guǒ Lǎo) - 張果老（ちょうかろう）Chokaro
The Elder Zhang Guo
Zhang Guo Lao is reputed to have been a recluse of the 7th or 8th century. He travelled with a white mule that could go incredible distances and then be folded up and placed in a wallet. Zhang Guo Lao had only to sprinkle water to the mule to reconstitute it for further use.
Zhang Guo Lao's attribute is a drum made of a bamboo tube with two rods with which to strike it. The drum can cure life.
He is represented as an old man riding the mule, at times riding backwards.
Zhang Guo Lao is the emblem of old men.

Zhongli Quan (鐘离權; Pinyin: Zhōnglí Quán) - 漢鍾離（かんしょうり）Kanshori または鍾離権（しょうりけん）
Zhongli Quan was reputed to have lived during the Zhou dynasty (1122-256 BC). Among his many powers were transmutation and the knowledge of the elixir of life. His attribute is a fan, which can bring the dead back to life.
He is represented as a Fat Man with his bare belly showing.
Zhongli Quan represents the military man.

- quote -
The Eight Immortals 八仙 are a group of legendary xian ("immortals") in Chinese mythology.
Each immortal's power can be transferred to a power tool (法器) that can bestow life or destroy evil. Together, these eight tools are called the "Covert Eight Immortals" (暗八仙). Most of them are said to have been born in the Tang or Song dynasty. They are revered by the Taoists and are also a popular element in the secular Chinese culture. They are said to live on a group of five islands in the Bohai Sea, which includes Penglai Mountain-Island. 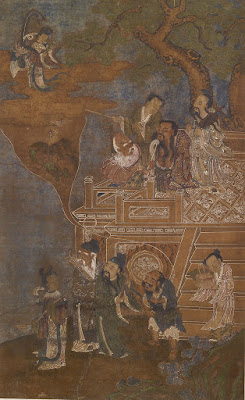 In literature before the 1970s, they were sometimes translated as the Eight Genies.
First described in the Yuan Dynasty, they were probably named after the Eight Immortal Scholars of the Han.
- In art
- In literature
- In qigong and martial art
- Reverence
- Depictions in popular culture
- - - More in the WIKIPEDIA !


Bashiko, Taoist immortal,
considered by the Japanese to be the first veterinary surgeon. He supposedly lived in China in the years 2697-2597 B.C. and cured a dying dragon by operating on its throat. Bashiko is rarely depicted in art, while another Taoist sage, Chinnan, is more popularly shown with dragons.

Kinko - Qin Gao (Kinkô sennin) 琴高仙人 Kinko Sennin
Kinko, who lived beside a river and was a painter of fish.
One day a giant carp offered to take him for a ride into the realm of the immortals. He returned after a month, telling his followers never to kill another fish. He then jumped into the river, where he was transformed into a carp himself. Kinko is usually shown reading a Taoist scroll while riding on the back of the magical fish.

Koshohei
Sennin Koshohei with a short stick in his hand leaning slightly over a small rock that turns into a goat. Koshohei led a herd of goats to the mountains and stayed there for 40 years in meditation. His brother found him after all that this time and was wondering where the goat were. Koshohei touched the boulders around him with a stick, and they turned into goats.