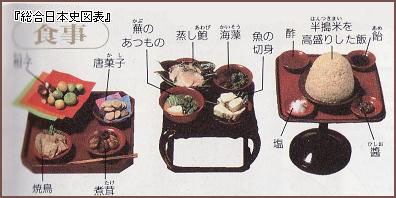 - quote -
Following the Jōmon period, Japanese society shifted from semi-sedentary hunter-gatherer lifestyle to an agricultural society. This was the period in which rice cultivation began, having been introduced by China. Rice was commonly boiled plain and called gohan or meshi, and, as cooked rice has since been the preferred staple of the meal, the terms are used as synonyms for the word "meal". Peasants often mixed millet with rice, especially in mountainous regions where rice did not proliferate.

During the Kofun period, Chinese culture was introduced into Japan from the Korean Peninsula. As such, Buddhism became influential on Japanese culture. After the 6th century, Japan directly pursued the imitation of Chinese culture of the Tang dynasty. It was this influence that marked the taboos on the consumption of meat in Japan. In 675 AD, Emperor Temmu decreed a prohibition on the consumption of cattle, horses, dogs, monkeys, and chickens during the 4th-9th months of the year; to break the law would mean a death sentence. Monkey was eaten prior to this time, but was eaten more in a ritualistic style for medicinal purposes. Chickens were often domesticated as pets,  while cattle and horses were rare and treated as such. A cow or horse would be ritually sacrificed on the first day of rice paddy cultivation, a ritual introduced from China. Emperor Temmu's decree, however, did not ban the consumption of deer or wild boar, which were important to the Japanese diet at that time.

The 8th century saw many additional decrees made by emperors and empresses banning the killing of any animals. In 752 AD, Empress Kōken decreed a ban on fishing, but made a promise that adequate rice would be given to fishermen whose livelihood would have otherwise been destroyed. In 927 AD, regulations were enacted that stated that any government official or member of nobility that ate meat was deemed unclean for three days and could not participate in Shinto observances at the imperial court.

It was also the influence of Chinese cultures that brought chopsticks to Japan early in this period. Chopsticks at this time were used by nobility at banquets; they were not used as everyday utensils however, as hands were still commonly used to eat. Metal spoons were also used during the 8th and 9th centuries, but only by the nobility. Dining tables were also introduced to Japan at this time. Commoners used a legless table called a oshiki, while nobility used a lacquered table with legs called a zen. Each person used his own table. Lavish banquets for the nobility would have multiple tables for each individual based upon the number of dishes presented.

Upon the decline of the Tang dynasty in the 9th century, Japan made a move toward its individuality in culture and cuisine. The abandonment of the spoon as a dining utensil – which was retained in Korea – is one of the marked differences, and commoners were now eating with chopsticks as well. Trade continued with China and Korea, but influence en masse from outside of Japan would not be seen again until the 19th century. The 10th and 11th centuries marked a level of refinement of cooking and etiquette found in the culture of the Heian nobility. Court chefs would prepare many of the vegetables sent as tax from the countryside. Court banquets were common and lavish; garb for nobility during these events remained in the Chinese style which differentiated them from the plain clothes of commoners.

The dishes consumed after the 9th century included grilled fish and meat (yakimono), simmered food (nimono), steamed foods (mushimono), soups made from chopped vegetables, fish or meat (atsumono), jellied fish (nikogori) simmered with seasonings, sliced raw fish served in a vinegar sauce (namasu), vegetables, seaweed or fish in a strong dressing (aemono), and pickled vegetables (tsukemono) that were cured in salt to cause lactic fermentation. Oil and fat were avoided almost universally in cooking. Sesame oil was used, but rarely, as it was of great expense to produce.

Documents from the Heian nobility note that fish and wild fowl were common fare along with vegetables. Their banquet settings consisted of a bowl of rice and soup, along with chopsticks, a spoon, and three seasonings which were salt, vinegar and hishio, which was a fermentation of soybeans, wheat, sake and salt. A fourth plate was present for mixing the seasonings to desired flavor for dipping the food.
The four types of food present at a banquet consisted of dried foods (himono), fresh foods (namamono), fermented or dressed food (kubotsuki), and desserts (kashi).
Dried fish and fowl were thinly sliced (e.g. salted salmon, pheasant, steamed and dried abalone, dried and grilled octopus), while fresh fish, shellfish and fowl were sliced raw in vinegar sauce or grilled (e.g. carp, sea bream, salmon, trout, pheasant). Kubotsuki consisted of small balls of fermented sea squirt, fish or giblets along with jellyfish and aemono. Desserts would have included Chinese cakes, and a variety of fruits and nuts including pine nuts, dried chestnuts, acorns, jujube, pomegranate, peach, apricot, persimmon and citrus. The meal would be ended with sake.
- source : wikipedia -

History of Soy Sauce and Miso
Soy sauce originally comes from Chinese jiang. It is believed that it was brought to Japan in the Nara period. After that, it developed independently in Japan.
In the Heian period, jiang became popular and came to be a daily necessity.
The Buddhist priest, Kakushin of the Shinshu area brought the recipe for miso to Japan from Song, China in 1250.
- reference -

Tea's Transmission to Japan and Its Entry into Japanese Culture
平安時代とお茶

- quote -
During the Nara and Heian periods, many envoys were sent to Tang-dynasty China. On several occasions, these envoys were accompanied by Japan's leading Buddhist scholars, including Saicho, Kukai and Eichu. These Buddhist monks brought back with them tea seeds from Tang China, which are said to be the origin of tea in Japan.
In the early Heian Period, Emperor Saga is said to have encouraged the drinking and cultivation of tea in Japan. Tea drinking was first referred to in Japanese literature in 815 in the Nihon Koki (Later Chronicles of Japan), recording that Eichu invited Emperor Saga to Bonshakuji temple, where he was served tea.
At this time, tea was extremely valuable and only drunk by imperial court nobles and Buddhist monks.
- source : www.itoen.co.jp/eng - 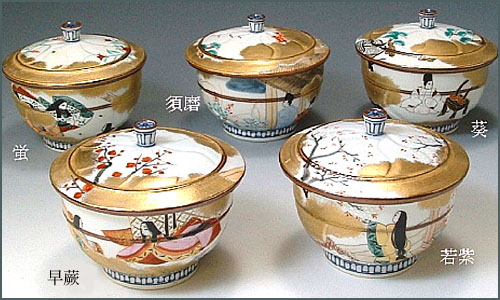 . hocho do 庖丁道 the way of the kitchen knife .
The Art of Slicing Fish and Fowl in Medieval Japan.


. inbi no gohan 忌火の御飯 "rice on the memorial day" .
During the Heian period, on two days of the year （on the 11th day of the sixth and 12th month) on the day of the moon festival (tsukinami no matsuri 月次祭) , the deity Amaterasu Omikami would take part of the meal together with the emperor (shingojiki 神今食) in a special hall of the imperial grounds in Nara.

. Kyoosai 京菜 Kyoto Vegetables .
Many are cultivated since the Heian period and a lot grow in temple gardens.

. mozuku もずく(水雲／海蘊) seaweed .
It is already mentioned in literature from the Heian period, written as 毛都久.
It is said when you wash your hands with mozuku it keeps women's hands soft and moist.


. o-chazuke お茶漬け rice with a topping .
This dish first became popular in the Heian period, when water was most commonly poured over rice.


. san-niku ryori 山肉料理 "Mountain Meat Cuisine" .
Meat from four-legged animals was not allowed for the pious Buddhist to eat and also not approved in Shinto. But there were exceptions, especially for ill people and for the poor mountain villages and hunter areas, since the Heian period.

. toso enmei san 屠蘇延命散 medicine to prolong life . - toso 屠蘇 ritual ricewine
It was introduced from China in the Heian period for the Emperor Saga Tenno 嵯峨天皇 and been offered at court on the third day of the New Year.

. tsukimi dango 月見団子 dumplings for moon viewing .
It's said that this moon viewing custom was introduced to Japan from China during Nara and Heian period.


. ubatama, nubatama, mubatama 射干玉 / 鳥羽玉 leopard flower .
“nuba” means black.
When ancient Japanese Waka poets described the blackness of a night, or a woman's voluptuous hair, they used this black berries as a beautiful image and put “Nubatama” as a introduction of those night blackness or hair blackness.

Email ThisBlogThis!Share to TwitterShare to FacebookShare to Pinterest
Labels: - - - Food and Drink - - -