During the late Heian period there lived a miko 巫女 Shrine maiden at the border between Natori and 前田 Maeda. She made the long pilgrimage to Kumano (in Wakayama) every year. When she got older (roojo) she could not visit Kumano any more.
Then she built three Kumano Shrines in Natori.
The Shrine maiden was soon known as Natori Rojo 名取老女 The Old Woman from Natori.
Once a Shugendo priest from Kumano came to Natori. He had a dream about a letter written on a leaf of a nagi tree ナギの葉 / 椰の葉 (Podocarpus nag). He found the leaf and handed it to the old woman, with 31 Characters written on it (the letters seemed to have been made by the bites of caterpillars).
「道遠し年もいつしか老いにけり思い起こせよわれも忘れじ」
She cried when she read the note and showed the priest around the shrine.

In 1811, the villagers built a small shrine and memorial stone in her honor.
Now people come to offer straw sandals in memory of her travels. 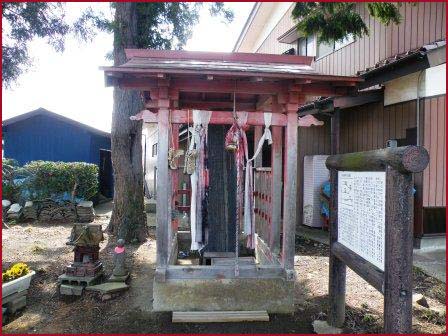 - quote -
Kumano Hongusha Shrine in Takadate, Natori City, Miyagi Prefecture,
is a shrine associated with Kumano Worship. What is called Kumano Worship is the faith in Kumano Sanzan, a set of three Grand Shrines located in the southeastern part of the Kii Mountain Range in Wakayama Prefecture; Kumano Hongu Taisha, Kumano Hayatama Taisha and Kumano Nachi Taisha. It had spread all over the country in the late Heian period and onward.

Kumano Shrines have become located in various parts of Japan as Kumano Worship spread in the country; however, Natori is the only the place that has three Kumano Grand Shrines. It is said that in the late Heian period, a mountain practitioner visited an old shrine priestess in Natori and passed on a message from Kumano Gongen, the deity of Kumano Sanzan. To hear this, she decided to found the three Kumano Great shrines 熊野三所権現 in Natori in 1123.

Comparing Mt. Takadate (Mt. Natori) to the Kumano Mountains, the Natori River to the Kumano River and Sendai Bay to the Kumanonada Sea, Natori Kumano Sanzan has become the largest-scaled sacred site of Kumano Worship in the Tohoku region. 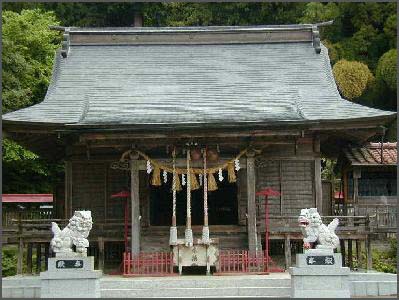 Kumano Hongusha Shrine is located in the northernmost of the three shrines. Honden (the main hall) is a stately building with a Kokera-buki (thin wooden shingles) roof.

A Deer Dance, which is designated as an intangible cultural property of Natori City, has been handed down at this shrine. It is a traditional dance, in which dancers wear a deer head and carry the red and the yellow flags on their backs. The name of the shrine is written on the red flag, while the four-character idiom of kanji meaning “Hope for a rich harvest” is written on the yellow one.
- source : nippon-kichi.jp -

- quote
In the town of Shikama 色麻町 in Miyagi Prefecture in northeastern Japan,
there is a shrine devoted to a water god. In the Heian period (794-1192), a shogun named Sakanoue no Tamuramaro arrived in this area. A man called Touemon swam like a kappa across the swiftly flowing river and worked hard for the shogun. The shogun was so pleased that he gave Touemon the surname kappa, which has been handed down by generations of chief priests at the shrine ever since.

The kappa's favorite food is the cucumber. In ancient times, some houses had streams running through their grounds for washing vegetables and other things. People would take the first cucumbers harvested and throw them into these streams as offerings to the water god.
- source : web-japan.org/kidsweb