A lot has been written about the importance of the Silk Road and Japanese culture.
Here I will concentrate on the Heian period . . . and the latest developments since 2015. 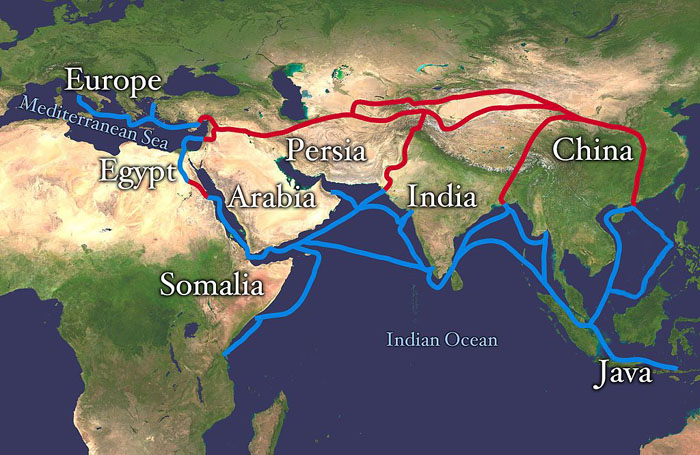 is a network of trade and cultural transmission routes that were central to cultural interaction through regions of the Asian continent connecting the West and East by merchants, pilgrims, monks, soldiers, nomads, and urban dwellers from China and India to the Mediterranean Sea during various periods of time.
- source : wikipedia - is a cooperative project among countries in Asia and Europe and the United Nations Economic and Social Commission for Asia and the Pacific (ESCAP), to improve the highway systems in Asia. It is one of the three pillars of the Asian Land Transport Infrastructure Development (ALTID) project, endorsed by the ESCAP commission at its 48th session in 1992, comprising Asian Highway, Trans-Asian Railway (TAR) and facilitation of land transport projects.
- source : wikipedia -


- quote -
One Belt, One Road (Chinese: 一带一路 also known as the Belt and Road Initiative; abbreviated OBOR)
is a development strategy and framework, proposed by People's Republic of China that focuses on connectivity and cooperation among countries primarily in Eurasia, which consists of two main components, the land-based "Silk Road Economic Belt" (SREB) and oceangoing "Maritime Silk Road" (MSR). The strategy underlines China's push to take a bigger role in global affairs, and its need to export China's production capacity in areas of overproduction such as steel manufacturing.
- source : wikipedia -


- quote - Japan Times Jun 23, 2015 -
China's Indian Ocean strategy
Brahma Chellaney
NEW DELHI –
What are Chinese attack submarines doing in the Indian Ocean, far from China’s maritime backyard, in what is the furthest deployment of the Chinese Navy in 600 years? Two Chinese subs docked last fall at the new Chinese-built and -owned container terminal in Colombo, Sri Lanka. And recently a Chinese Yuan-class sub showed up at the Pakistani port city of Karachi.
The assertive way
China has gone about staking its territorial claims in the South and East China seas has obscured its growing interest in the Indian Ocean. This ocean has become the new global center of trade and energy flows, accounting for half the world’s container traffic and 70 percent of its petroleum shipments.
China’s newly released defense white paper, while outlining regional hegemony aspirations, has emphasized a greater focus on the seas, including an expanded naval role beyond its maritime backyard. The white paper says that, as part of China’s effort to establish itself as a major maritime power, its navy will shift focus from “offshore waters defense” to “open seas protection” — a move that helps explain its new focus on the Indian Ocean, with the Maritime Silk Road initiative at the vanguard of the Chinese grand strategy. To create a blue water force and expand its naval role, China is investing heavily in submarines and warships, and working on a second aircraft carrier.
President Xi Jinping’s pet project
is about expanding and securing maritime routes to the Middle East and beyond through the Indian Ocean, which is the bridge between Asia and Europe. Xi’s dual Silk Road initiatives — officially labeled the “One Belt, One Road” — constitute a westward strategic push to expand China’s power reach. Indeed, Xi’s Indian Ocean plans draw strength from his more assertive push for Chinese dominance in the South and East China seas.
The Chinese
maneuvering in the Indian Ocean — part of China’s larger plan to project power in the Middle East, Africa and Europe — aims to challenge America’s sway and chip away at India’s natural-geographic advantage. Xi has sought to carve out an important role for China in the Indian Ocean through his Maritime Silk Road initiative, while his overland Silk Road is designed to connect China with Central Asia, the Caspian Sea basin and Europe.
The common link
between the two mega Silk Road projects is Pakistan, which stands out for simultaneously being a client state of China, Saudi Arabia and the United States — a unique status.
During a visit to Pakistan in April,
Xi officially launched the project to connect China’s restive Xinjiang region with the warm waters of the Arabian Sea through a 3,000 km overland transportation corridor extending to the Chinese-built Pakistani port of Gwadar. This project makes Pakistan the central link between the maritime and overland Silk Roads. The Xi-launched corridor to Gwadar through Pakistan-held Kashmir — running in parallel to India’s Japanese-financed New Delhi-Mumbai Industrial Corridor — will hook up the two Silk Roads.
Indeed,
a stable Pakistan has become so critical to the ever-increasing Chinese strategic investments in that country that Beijing has started brokering peace talks between the Pakistan-backed Afghan Taliban and Kabul. This effort has been undertaken with the backing not just of Pakistan but also of the U.S., thus underscoring the growing convergence of Chinese and American interests in the Afghanistan-Pakistan belt.
snip
The Maritime Silk Road initiative, with its emphasis on high-visibility infrastructure projects, targets key littoral states located along the great trade arteries. At a time of slowing economic growth in China, infrastructure exports are also designed to address the problem of overproduction at home.

By presenting commercial penetration as benevolent investment and credit as aid, Beijing is winning lucrative overseas contracts for its state-run companies, with the aim of turning economic weight into strategic clout. Through its Maritime Silk Road — a catchy new name for its “string of pearls” strategy — China is already challenging the existing balance of power in the Indian Ocean.
Beijing,
while seeking to co-opt strategically located states in an economic and security alliance led by it, is working specifically to acquire naval-access outposts through agreements for refueling, replenishment, crew rest and maintenance. Its efforts also involve gaining port projects along vital sea lanes of communication, securing new supplies of natural resources, and building energy and transportation corridors to China through Myanmar and Pakistan.
One example
of how China has sought to win influence in the Indian Ocean Rim is Sri Lanka. It signed major contracts with Sri Lanka’s now-ousted president, Mahinda Rajapaksa, to turn that country — located along major shipping lanes — into a major stop on the Chinese nautical “road.” The country’s new president, Maithripala Sirisena, said on the election-campaign trail earlier this year that the Chinese projects were ensnaring Sri Lanka in a debt tap, with the risk that “our country would become a colony and we would become slaves.”
- snip -
Beijing is also interested in leasing one of the 1,200 islands of the politically torn Maldives. Xi has toured several of the key countries in the Indian Ocean Rim that China is seeking to court, including the Maldives, Tanzania and Sri Lanka.
From China’s artificially created islands in the South China Sea
to its ongoing negotiations for a naval base in Djibouti, the maritime domain has become central to Xi’s great-power ambitions. Yet it is far from certain that he will be able to realize his strategic aims in the Indian Ocean Rim, given the lurking suspicions about China’s motives and the precarious security situation in some regional states.

One thing is clear though: China wants to be the leader, with its own alliances and multilateral institutions, not a “responsible stakeholder” in the U.S.-created architecture of global governance. It is building naval power to assert sovereignty over disputed areas and to project power in distant lands. Determined to take the sea route to secure global power status and challenge the U.S.-led order, China is likely to step up its strategic role in the Indian Ocean — the world’s new center of geopolitical gravity.
- source : Japan Times - 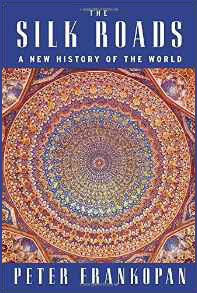 The Silk Roads: A New History of the World
by Peter Frankopan (Author)

It was on the Silk Roads that East and West first encountered each other through trade and conquest, leading to the spread of ideas, cultures and religions. From the rise and fall of empires to the spread of Buddhism and the advent of Christianity and Islam, right up to the great wars of the twentieth century—this book shows how the fate of the West has always been inextricably linked to the East.

Peter Frankopan realigns our understanding of the world, pointing us eastward. He vividly re-creates the emergence of the first cities in Mesopotamia and the birth of empires in Persia, Rome and Constantinople, as well as the depredations by the Mongols, the transmission of the Black Death and the violent struggles over Western imperialism. Throughout the millennia, it was the appetite for foreign goods that brought East and West together, driving economies and the growth of nations.

From the Middle East and its political instability to China and its economic rise, the vast region stretching eastward from the Balkans across the steppe and South Asia has been thrust into the global spotlight in recent years. Frankopan teaches us that to understand what is at stake for the cities and nations built on these intricate trade routes, we must first understand their astounding pasts. Far more than a history of the Silk Roads, this book is truly a revelatory new history of the world, promising to destabilize notions of where we come from and where we are headed next.
- source : amazon com - 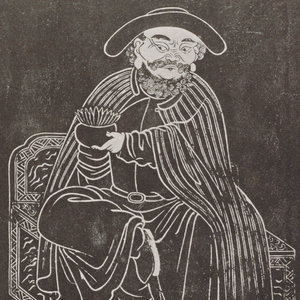