Symbols and Art Motives of the Heian Period

Auspicious symbols were used as art motives, many coming from China.

In the Jomon period (ca.12,500-200 BCE) ceramic vessels were decorated with impressed motifs, usually rope patterns (whence the term "Jomon" - "rope pattern").
In the Yayoi period (200 BCE-ca. 250 CE), the art of throwing pottery on the wheel reached Japan from China via Korea, and new designs appeared - zigzags, triangles in saw-tooth patterns (tasuki), whirlpools, and complex abstract linear designs. In the Kofun period (250-552) metal wares were embellished with motifs that had also come to Japan from China, such as dragons, or the four deities representing the four winds of heaven - the green tiger of the East, the white tiger of the West, the red phoenix of the South, and the black tortoise-snake of the North. Other motifs included people, horses, wagons, jewels (magatama; semi-precious comma-shaped stones), animals and birds.

As of the 6th century CE, decorative motifs from East Asia, especially of the Chinese Tang era (618-907) appeared. Through China, by way of Korea, there arrived motifs from the Buddhist art of India, from Persia, and from Rome's Eastern Empire, as well as from Central Asia along the Silk Road. Influenced by Chinese paintings of the Tang period, designs incorporated sacred sites (alamkara), such as the buildings and gardens of the "Western Paradise" of Buddha Amida, as described in the Buddhist sutras. In the Asuka period (552-645), the flowering honeysuckle (nindo) was frequently represented as an arabesque (karakusa; "Chinese grass"), a rhythmic decoration with many variations, seen on the haloes of Buddhist sculptures, or embellishing roof-tiles. This motif apparently came to the East from Greece. Also during the Asuka period, other decorative motifs reached Japan from the mainland - such as the lotus flower, clouds, and four-petalled blossoms.

During the Nara period (645-794), contacts with the mainland increased. With China there was direct contact, and the capital city of Nara was modelled on the Chinese capital, Chang-an. In 756, after the death of the Emperor Shomu, his widow transferred more than 600 items he had collected to the Shosoin Treasure House in the Todaiji Temple, together with a detailed catalogue. Many of the items in this collection were brought to Japan from China and Persia, and some were made by Chinese and Korean artisans who had come to Japan, or by local artists. Even though the Chinese influence is evident in the Japanese works, there is also a dynamic integration of decorative elements from the mainland and from Japan itself.
(For additional information, see Decorative Motifs during the Nara period) 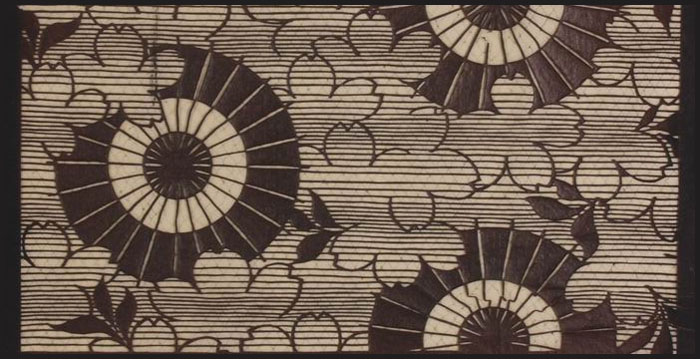 At the beginning of the Heian period (794-1185) the Nara motifs derived from the decorative arts of China were still very prevalent in Japan. However, long-tailed birds, the moon, the sun, and landscapes, all ornamented with gold and/or silver also appeared. Artists began applying gold leaf (kirikane) to surfaces, such as clouds floating the sky, and the style became more painterly. They also used inlays of various materials such as mother-of-pearl and precious metals. The use of lacquer as ornament also increased. At this time the Phoenix Hall in the Byodoin Temple was embellished with colourful representations of imaginary flowers, from floor to ceiling. Here, designs of hosoge karakusa and lotus flowers are painted in rhythmic sequences or in random patterns that appear to be almost symmetrical.
These decorations are very colourful, applied in gradations of colour (ungen saishiki) that had already been seen in the Asoka period, lending the two-dimensional designs a sense of depth. Ishi-datami (tile patterns) were still very prevalent in the Heian period, but at the end of the Chinese Tang era official contacts between Japan and China ceased until the 15th century. So that decorative motifs with local character were developed in Japan.
The patrons of art at that time were the aristocrats who lived in Kyoto, the capital, and the artists decorated practical items (tsukurimono), intended for the festivities of the cultural elite, with great elegance and finesse (furyu). It is apparent from these works that the nobility preferred naive motifs derived from nature, such as birds flying over a field.
As a rule, these scenes embellish inlaid lacquer wares. Another popular design of the era was the wheels of a wagon floating amid waves, derived from the custom of soaking the wheels in water to prevent the wood from drying out. This motif often appeared on paper for writing poetry, for fans, or for copying sutras.

The designers of the Heian period certainly loved painting creatures (butterflies, dragonflies, birds, hares) and plants (wisteria, pampas, maple, plum, cherry), as well as motifs from earlier times. The aristocracy were fascinated by the changing seasons of the year, and seasonal plants were used for decoration - chrysanthemum, akigusa (autumn flowers and foliage), reeds, willow fronds, bamboo or melons. Lions or phoenixes were painted inside medallions, and waves or misty effects were created with powdered silver or gold (sunagashi), rows of kikko (rows of hexagons like tortoise-shell), lozenges, and marbling effects were created by spraying ink onto wet paper (suminagashi).
At the beginning of the 12th century, new motifs appeared - the tomoe (comma), miru (seaweed), and maple leaves (kaede). A modified form of the medallion (ban-e) was used mainly on textiles and furniture, incorporating a lion inside a circle, and was also the basis for family crests , developed later. Textiles with diagonal stripes were preferred to Chinese embroidery.

A new art movement arose in China during the Sung Dynasty (960-1279), the artists and the educated elite wanting to depict truth (in Japanese: shin) in artistic creations. They adopted calligraphy and ink painting as means of personal expression, and the decorative arts declined in popularity. In the Chinese text "Abstract from the Xuanhe Period" (1120), a catalogue of art works from the Emperor Huizong's collection (Huizong: 1082-1135), there is the following note about Japanese screen paintings:
"In Japan there are paintings, but we do not know the names of the artists who painted them. These works depict the landscape and natural scenes of their homeland. They use thick layers of pigment, and much use is made of gold and primary colours. They do not portray true reality, but are paintings full of colour, dazzling to the eye in their glowing beauty".

At the end of the 12th century, the political power of the aristocracy was superseded by the Japanese Army, and the seat of government was transferred to Kamakura in the east of the country. The emperor and his court remained in the Heian capital (today Kyoto), the centre of culture.

This module focuses on the Heian period, 794-1185. Access the Heian Japan materials here: 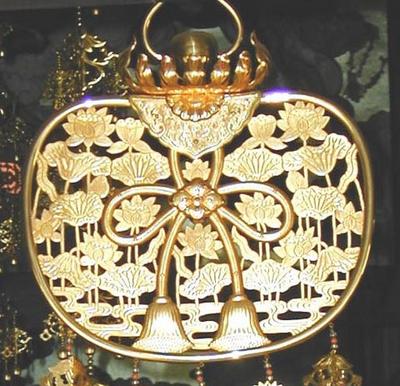 Since the Heian period gilded bronze was often used.
... iconography of two Kalavinkas facing each other on a ground of floral tendrils ... 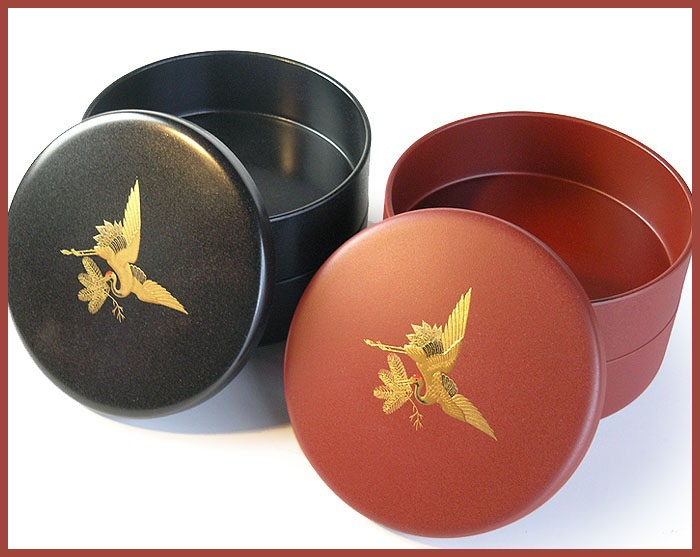 
. Symbols and Motives in Asian Art .