Matsuo Basho visited many places of interest since the Heian period, especially on his travels written down in
Oku no Hosomichi.

. - - - Station 20 - Shiogama 塩釜 - - - .
Sue no matsuyama 末の松山
This is also an Uta makura. Among the Azuma Uta of the Kokinshu is: -- Another poem from Goshuishu by Kiyohara no Motosuke (One of the 36 poetic geniuses of the Heian period, he was also a skilled player of the koto. He was editor of the Gosen Waka Shu ((909-990)): --
Izumi no Saburo 泉三郎
Izumi no Saburo was the third son of Fujiwara no Hidehira (?-1187) who built the powerful Fujiwara presence at Hiraizumi in the late Heian period.
and Saigyo  西行法師
visiting the grave of Fujiwara Sanekata, a Heian period poet who was exiled in the North:

. - - - Station 25 - Obanazawa 尾花沢 - - - .
鈴木清風 Suzuki Seifu / (1651 - 1721) . Suzuki Michiyuu 鈴木道祐
残月軒清風
He was a dealer in safflowers (benibana), a speciality of the region. Their extract was an important ingredient in cosmetics and for dying cloths since the Heian period.

. - - - Station 37 - Natadera 那谷寺
and Yamanaka Onsen 山中温泉 Yamanaka Hot Spring - - - .
The name was changed to Natadera by the emperor Kazan, who ruled during the Heian Period. In his later years, Kazan often stayed at the temple, and designed the gardens to resemble the Fudaraku mountain of the Pure Land on which lives Kannon Bosatsu.


. Dōsojin 道祖神 Dosojin - Roadside Gods .
In the famous “Narrow Road to the North”Oku no Hosomichi 奥の細道, Matsuo Basho writes about the stone statues of the wayside gods.

. Genji Monogatari 源氏物語 Tale of Genji .
Songs in the Garden: Poetry and Gardens in Ancient Japan

. hanagokoro, hana gokoro 花心 "flower-heart" .
that expression seems already been used in Heian poetry ... the heart of a lady in love, but also the heart changing as fast as cherry blossoms fall ...


. - hototogisu 郭公 / ほととぎす - .
This is one of the classical season words, used in the poetry of the Heian period.
Basho sometimes uses the word and adds a new twist, closer to the normal life of the normal people of his Edo.
Basho uses the Chinese characters 郭公, which was common during the Heian period.

. Kigo and kidai 松尾芭蕉と季語（季題）- Jahreszeitenworte -.
Seasonal references were very important in the poetry of Japan since the Heian period. Manuals with collections of seasonal words grew as composing poetry moved on from the aristocracy to the townspeople of the Edo period.

. kiku 菊 and the Chrysanthemum Festival .
"When I left Nara it was time for the Chrysanthemums, but now as I reach Naniwa, it is time for the beginning of the autum moon."
During the night of yoizukiyo, on the second or third day of the full moon cycle, the sickle moon is out only for a short while in the early evening. Thus it was well loved by poets since the Heian period.
Basho had left Nara on the 9th day of the 9th lunar month (the Chrysanthemum Festival) (Now about October 23 / 24).
He passed the Kuragoshi Pass and the Ikoma Mountain range and arrived in Naniwa/Osaka at the Ikutama shrine 生玉神社 on the 10th day and the roads where still full of the fragrance of chrysanthemums.

. - Kiso 木曽 / 木曾 in Nagano - .
桟やまづ思ひ出づ馬迎へ
The Hanging Bridge at Kiso 木曽の架け橋 / 木曽のかけはし Kiso no Kakehashi
kakehashi ya mazu omoi-izu uma mukae
- - - This is an old custom since the Heian period, on the 15th day of the eighth lunar month.
An official from the court comes to pick up the horses (mukae, mukai) at Kirihara, from the various horse breeding regions. He comes up to this bridge to meet the horses and has them handed over to bring to the court.

. - Nara 奈良 ancient capital of Japan - .
There is also a waka by Ise no Oosuke - Taifu 伊勢大輔 a poet of the Heian period.

. Ochazuke and Naracha 奈良茶 .
The origins of Ochazuke is still unknown. However, in Heian era, there was a meal called "yuzuke", which is a bowl of rice and hot water poured on top. 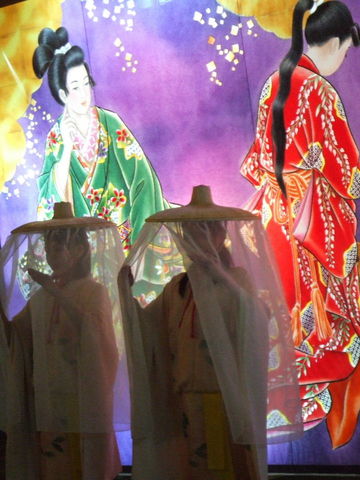 . - Tanabata 七夕 Star Festival - .
It has been celebrated since the Heian period in Japan, with the wish that young girls would become proficient in weaving and keeping a good home.

. - ume ga ka 梅が香 plum fragrance - .
ume, sometimes spelled mume むめ, as it was called in the Heian period.
Basho makes use of both spellings.
Prunus mume, a kind of apricot tree.

. - utabukuro, uta fukuro 歌袋 song-pouch, bag to keep poetry - .
utabukuro are made of strong Japanese paper (danshi 檀紙), or cotton or other material.
Often called michinokugami 陸奥紙 because it was produced in Michinoku area (part of modern day Tohoku 東北) during the Heian period.


. - Yamashiro 山城 and Ide 井出 / 井手 - .
“Yamashiro” was formerly written with the characters meaning “mountain” (山) and “area” (代); in the 7th century, there were things built listing the name of the province with the characters for “mountain” and “ridge”/“back” (山背国). On 4 December 794 (8 Shimotsuki, 13th year of Enryaku), at the time of the christening of Heian-kyō, because of the resultant scenic beauty when Emperor Kammu made his castle utilizing the natural surroundings, the shiro was finally changed to “castle” (山城国).

. - yume 夢 dream - .
夢よりも現の鷹ぞ頼もしき
yume yori mo utsutsu no taka zo tanomoshiki
- - - Basho is writing with respect to a waka in the Kokinshu poetry almanach of the Heian period. 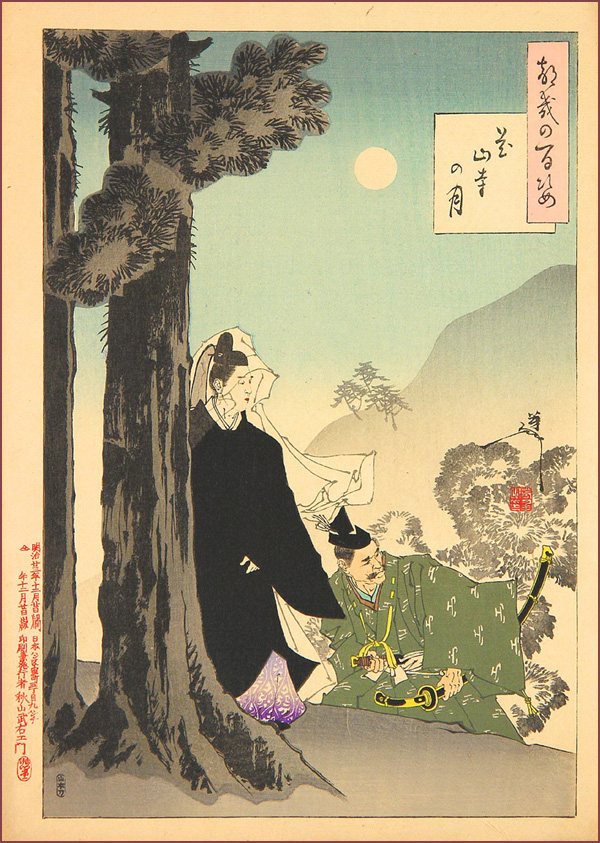 
- quote -
In 984 Enyu Tenno abdicated in favor of Kazan Tenno and the next heir designated was one of Kaneie's grandsons. Kazan was the grandson of the deceased Fujiwara Koretada. Yoritada continued as regent. The change of ruler benefited Koretada's son Yoshichika, who now joined the rapid-promotion track. It may be easily seen that political struggles between the Fujiwara and others had all but ceased and now the competition was among the steadily increasing number of active Fujiwara lineages.

Kazan Tenno's favorite wife died in an advanced stage of pregnancy in 986 and the emperor became distraught and started to talk of abdicating and becoming a Buddhist monk.
. Japanese History / The Middle Heian Period .